I’ve been to the Lake District many times, but never before in winter. We arrived in Kendal just as sunset was turning the surrounding hills a delicious shade of ice cream pink.

I’ve been to the Lake District many times, but never before in winter. During a three hour car journey filled with traffic jams, fog and hail, I began to question the wisdom of the undertaking. But arriving in Kendal just as sunset was turning the surrounding hills a delicious shade of ice cream pink it all began to seem worthwhile.

KENDAL HOSTEL is an Independent Hostel and can be found on this map of hostels in Cumbria and the Lake District.  It is a wonderful, ramshackle old warren of a building, with floorboards that buck and bend like a storm-tossed sea. It reminded me strongly of the hostels I’d stayed in as a child; how vast and mysterious they had seemed; how my sisters and I loved exploring round all the strange nooks and crannies, making up adventures as we went.

Jan and Kristina couldn’t have been more welcoming and helpful. I was loaded up with flyers, leaflets, maps, timetables, and guidebooks to borrow for the weekend.

We explored the town only briefly before deciding that it was time for dinner. A few yards down the road from the hostel was a beautifully decorated Thai restaurant, Jintana, where we enjoyed spring rolls, prawn crackers, stir fried tofu and a rich lamb curry. We drank Black Sheep and Cumberland Ale. The food was delicious, and reasonably priced. My only complaint was with the chairs, which looked beautiful, but seemed to have been designed by someone who had never actually met a human, and certainly didn’t understand how their backs work. 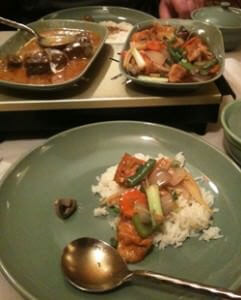 After the meal we took a stroll through the town, and tried a few of the local Lake District pubs. It was absolutely freezing (weather reports said -7c overnight!) Kendal’s oldest pub, Ye Olde Fleece Inn, had good beer and handsome wooden booths that looked scavenged from a church. The Ring o’ Bells is one of England’s very few pubs on consecrated ground. There we drank Thwaite’s Nutty Black (apparently voted ‘Best mild in the world’!), and I shivered despite the roaring fire.

The church next door looked stunning, illumined by an icy full moon, witht he backdrop of the Lake District.

We turned in early to our eyrie under the eaves in the Hostel. The night was freezing, but we were perfectly cosy under a warm duvet.

We woke to bright blue skies and sunshine, with ice underfoot. My partner, Ian, had never been to the Lake District before and was understandably keen to see an actual lake and some mountains. So we drove up the edge of Lake Windermere to Ambleside. We explored the lake shore, a small park and some Roman ruins before setting off up Loughrigg Fell. The sun was dazzling off Windermere; the woods filled with richly contrasting autumn colours of russet leaves and bright green lichens. To the north, snow-capped mountains loomed above Ambleside. It was beautiful, and once we got climbing the hill, we soon warmed up. But, having rained so much recently, and then suddenly frozen, there was a lot of ice on the ground, making the steep paths hard going.

We climbed a low-ish flank of Loughrigg Fell, stopped for lunch on a protruding tree root overlooking Loughrigg Tarn, then continued north towards Grasmere.  All beatiful areas of the Lake District.

As the day progressed much of the ice thawed. But it was a different story once we reached the north face of Loughrigg Fell. I don’t think the sun actually reaches the ground there in winter. The entire north face was still frozen; the path like an ice rink. There were many other walkers out, and all elected to walk very carefully through the (very steep) frozen grass and bracken rather than the path. Unfortunately this meant we didn’t have much time to appreciate the views across Grasmere and Rydal Water, as we daren’t take our eyes from the ground for a moment! Some of the those ice-gripping boot attachments would have come in very handy here. Once we reached Rydal and safe, flat ground, we stopped for a cup of tea at the Badger Bar. The pub is built into the side of a cliff face, and the recently refurbished women’s bathroom has sinks built into the rock face.

From here we set off through the grounds of Rydal Hall, stopping to admire the ‘grot’ and the waterfall. We shuddered to see that some extremely hardy scouts were camping in the grounds, and admired their stoicism.

The sun was setting as we treked the last mile back into Ambleside. We didn’t have much time to explore the town as our six hours parking was close to expiring. But we did manage to pick up some enormous bath buns from one of the bakeries.

We had probably only walked eight miles, but it had been hard going, and we were exhausted when we got back to Kendal. We showered and went out fairly early to eat at the Weatherspoons, which was basic as you’d expect, but extremely good value. We drank Pendle Witch’s Brew at only £2.09 a pint, and bought more food than we could actually manage for about £10. It was warm and (being saturday night), busy, and we stayed there a good while.

But seeing it as our duty to sample as many pubs as possible, we decided to stop by Vats Bar on our way back to the hostel. This was also busy, and had interesting booths made from huge old beer vats. Here we drank Wainwright’s Ale and tried not to fall asleep.

On Sunday morning we set off to explore Kendal Castle in the Lake District, passing the church on the way, which looked almost as spectacular by bright sunshine as it did by moonlight. The path up to the castle was treacherous with ice, but we made it without mishap, and spent a pleasant hour poking around the ruins, reading the information boards, and taking photographs. We walked a longer way back to town simply to avoid the steep icy path, and were initially disappointed that many places (including the museums) weren’t open on a Sunday. But once we reached the high street there was a bit more bustle. We managed some Christmas shopping in Wainwright’s yard, had a welcome cup of tea at the Brewery cafe, and then visited the Brewery Arts Centre, where there was a craft fair and print exhibition.

PrintFest 2012 was full of so many wonderful pieces that I declined the offer of a Christmas present simply because I couldn’t decide which I liked best! But we have the websites of many of the artists, and will be choosing something at a later date.

We headed home after lunch, with a couple of final gifts from Kendal: a wonderful choir was singing multi-part carols as we left the Arts Centre; and as we drove back down to the M6 we saw a sun-dog – a rainbow in the form of a small disc, not much larger than the sun.

Winter in the Lake District was beautiful. With the right gear and preparation it makes for a wonderful and unusual getaway.

If you can find an alternative way to get there, then I would suggest that car-free might be a good way to visit the Lake District. We found that Kendal was not a particularly car-friendly town. The one-way system is busy and idiosyncratic, and parking expensive. Apparently there is a free car park somewhere, but we never managed to find it.

Jan at the hostel was keen to promote car-free tourism, and assured me that there is good public transport around the Lakes. She also pointed me at a helpful app, SeeMoreLakeDistrict, which identifies the destinations close to you.

Read more by Emma Woodcock on her Blog www.emmawoodcock.wordpress.com